Last summer I decided I needed to update the range of revision activities that I used with my GCSE class in preparation for their upcoming theory exams. I started to research and explore a range of revision games that I could adapt and use in lessons.

Many of the following activities were inspired from by @ASTsupportAAli from his superb toolkit.

The following activities were used as part of a revision carousel. 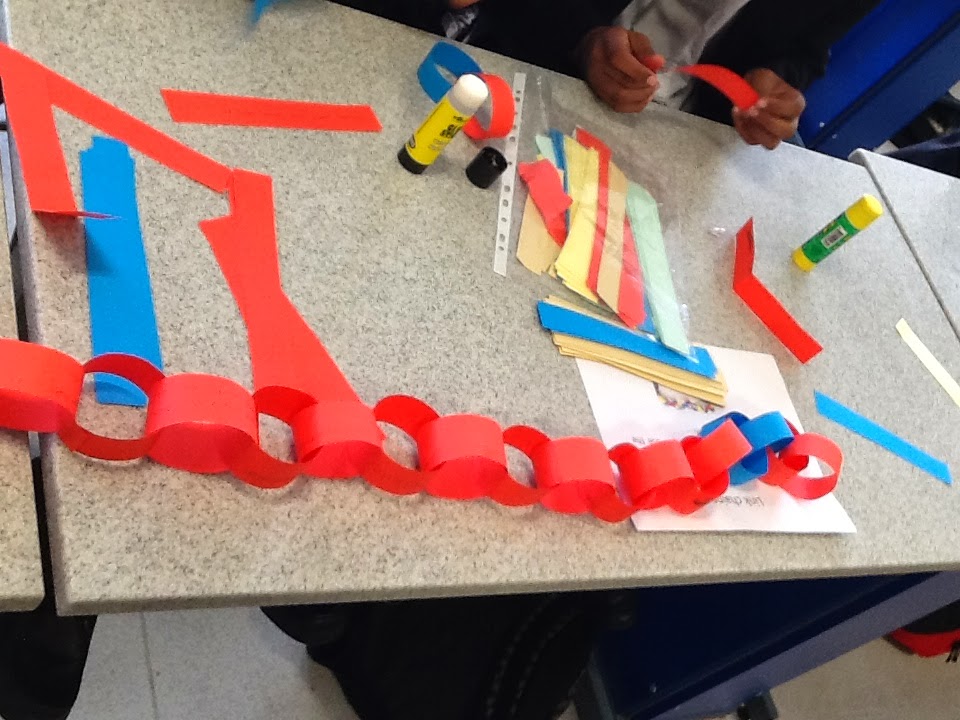 Cut up strips of paper for pupils to fold and glue together. Pupils write a key word or definition on each strip and connect them all together to form a chain. Each pupil or pair add to the previous link chain to produce a giant chain.
QR code revision Grids 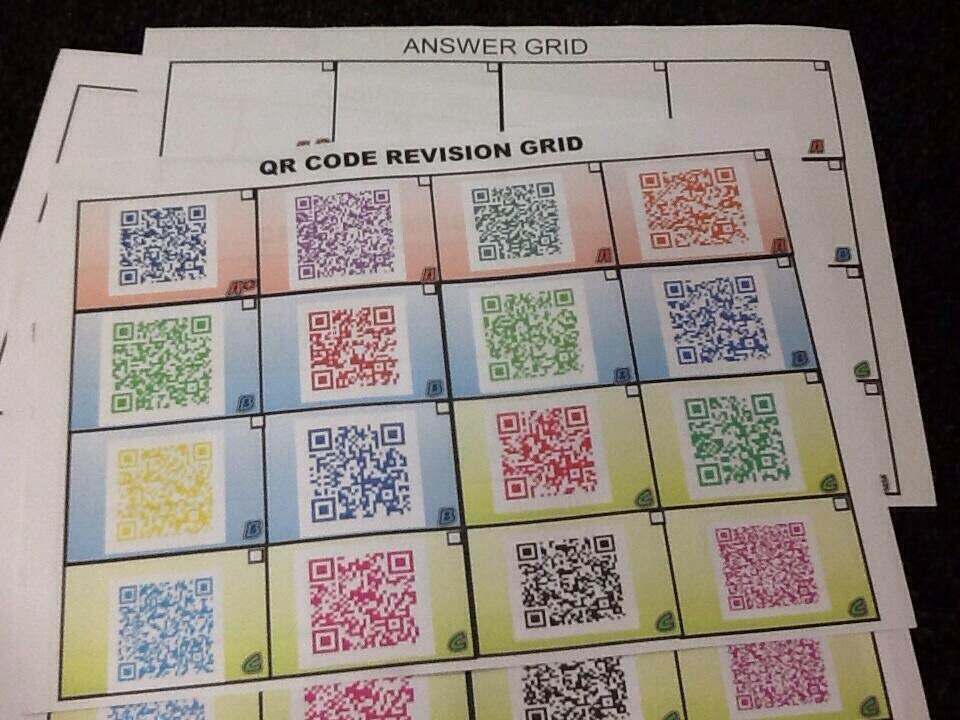 These grids allow pupils to have access to lots of relevant material related to the specification by scanning the QR codes on the sheet, pupils have links to a youtube video or an exam question. These grids are an alternative to giving pupils masses of paper and booklets. Pupils can scan the codes with their phones/tablets whilst on the go. 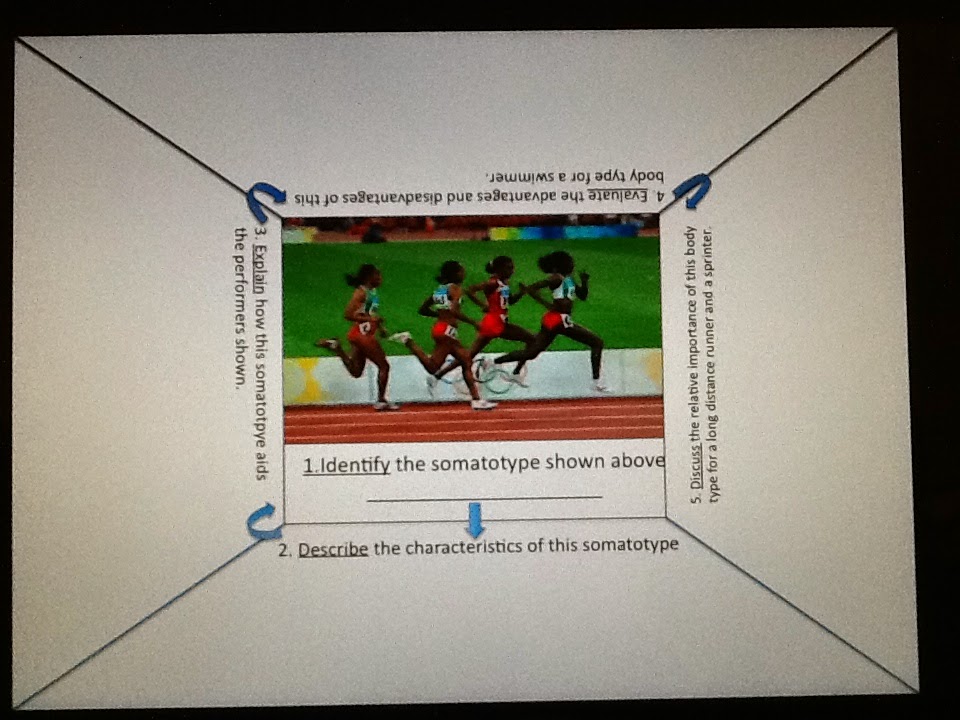 Question rotation squares allow pupils to show their understanding of a specific concept or topic. In the middle of the page is an image or diagram. The first question asks pupils to identify some basic information about the topic for 1 mark. As pupils rotate the paper they answer the progressively harder scaffolded questions finishing with a 6 mark question. 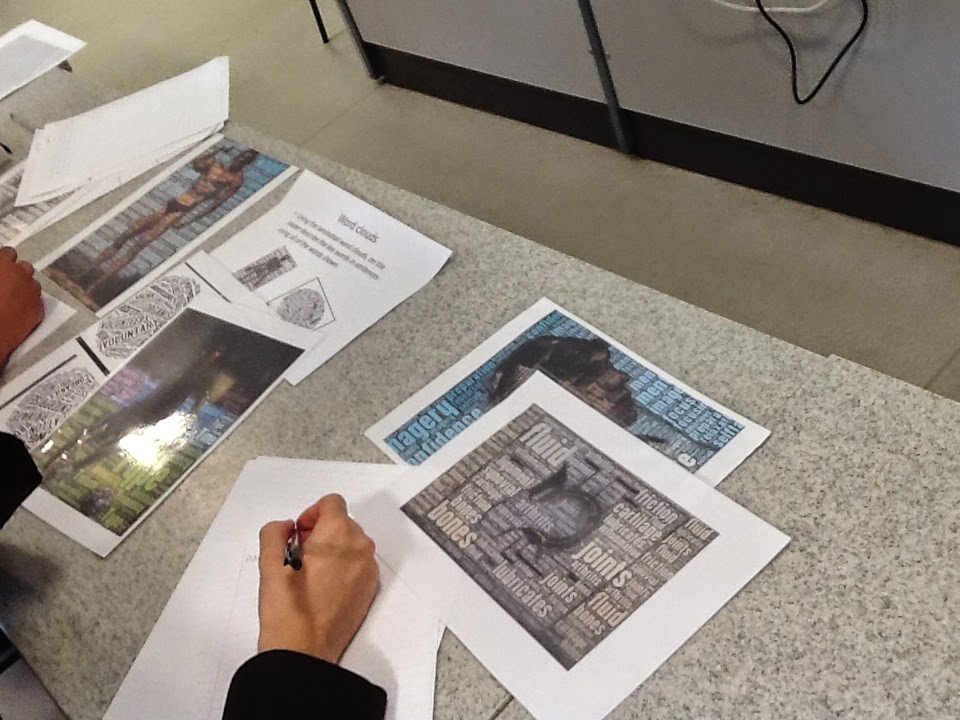 Using wordfoto, wordle or tagxedo you can create a visual image of a selection of key words related to a topic within a picture or image. The pupils challenge is to use the word cloud to write an extended piece of writing explaining the key words within the image, As a progression from this pupils could swap with a partner to mark or information add to. On each jenga block I wrote a question, with each block colour coded with either a red, yellow or green sticker. Green blocks were easier questions, yellow were average difficulty questions and red blocks were the harder questions. Pupils worked in pairs and took it in turns to move a block from the tower. If successfully moved without the block toppling, pupils had to answer the question before they could return it to the top of the tower.
Matching Pairs 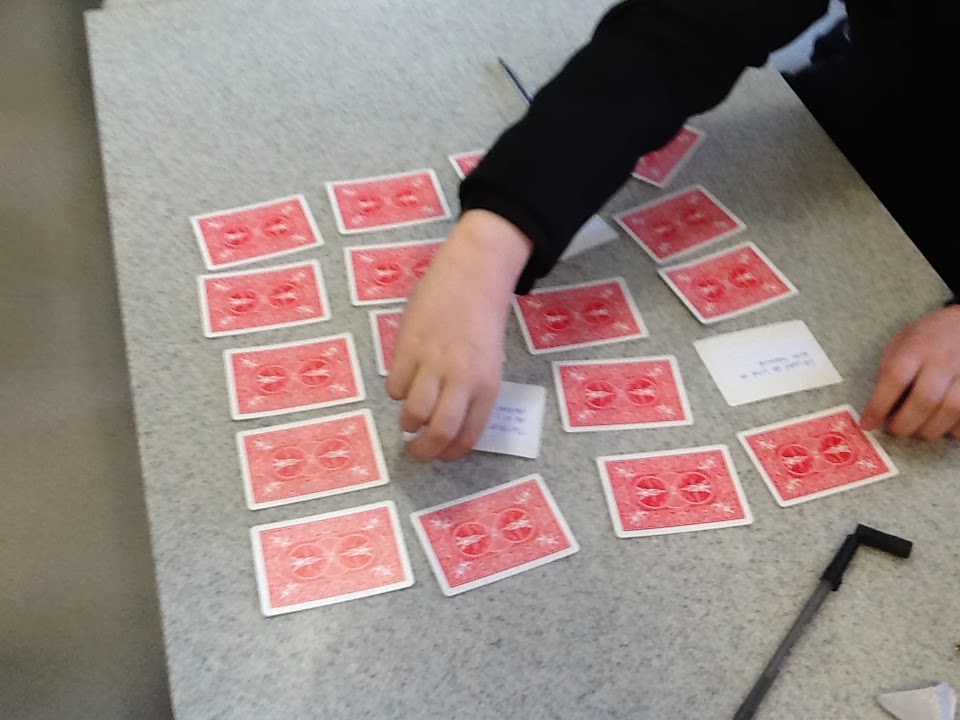 Matching pairs involves using 20 cards with blank sides (purchased from amazon!). 10 of the cards had a definition and the other 10 had the corresponding key words. Pupils took it in turns to turn over two cards at a time with the aim of finding a matching key word and definition. If correct they left them turned over, if incorrect, they had to be turned back. The winner is the pupil who finds the most pairs.
Tarsia Puzzles 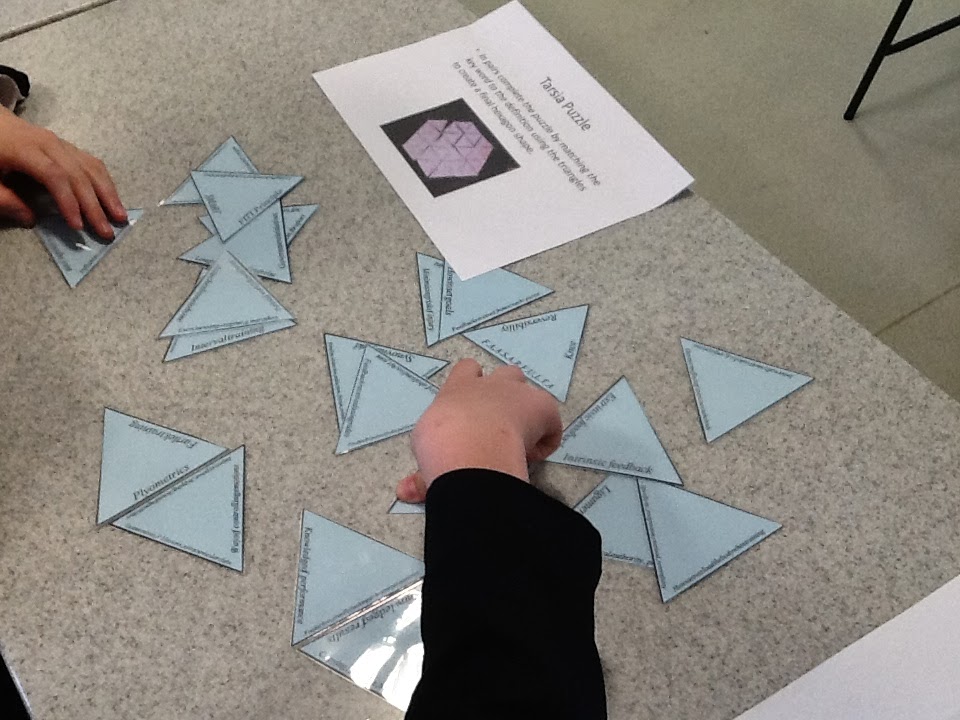 Tarsia puzzles involve creating a number of mini triangles that when put together make a giant hexagon shape. Each triangle has either a key word or definition that pupils have to rearrange and match each side together. As an alternative to this, pupils could create their own.
Scrabble Tiles 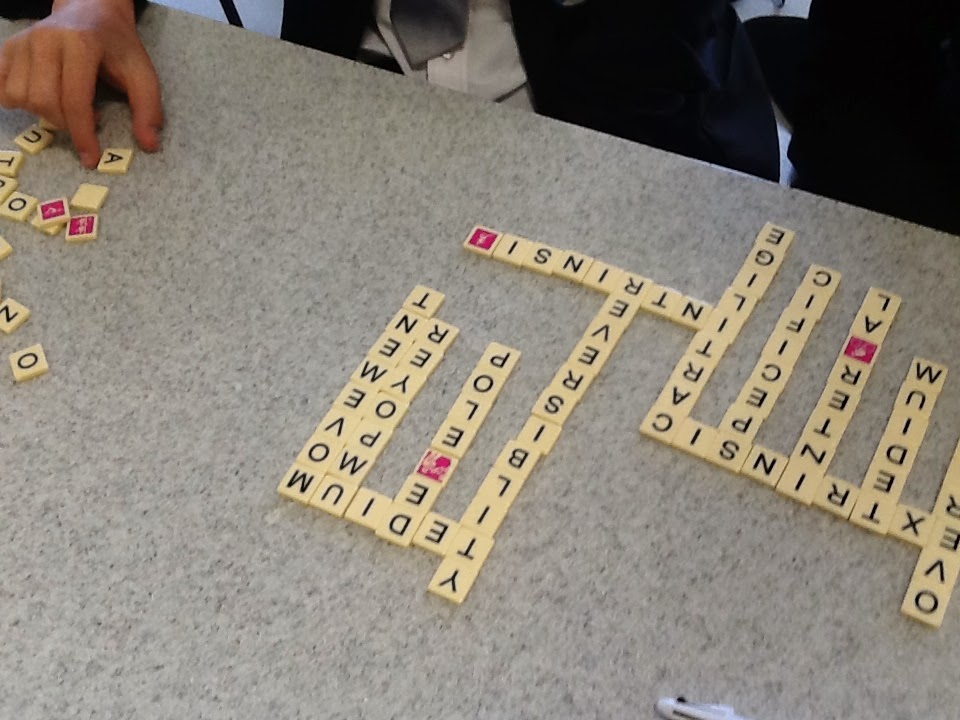 Pupils use the scrabble tiles to connect various key words together. As an extension pupils could write the definitions for each key word created.
Chatterboxes 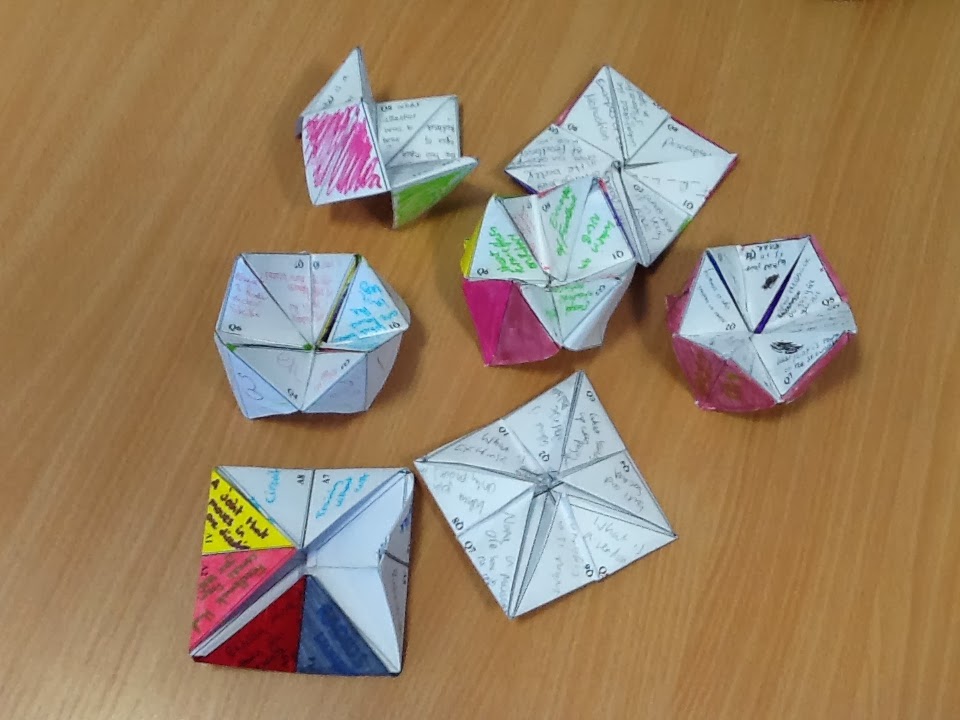 Using a chatterbox template, pupils write on the various sections questions and answers. Pupils can then swap their chatterboxes with a partner to test their knowledge.
Board Rush 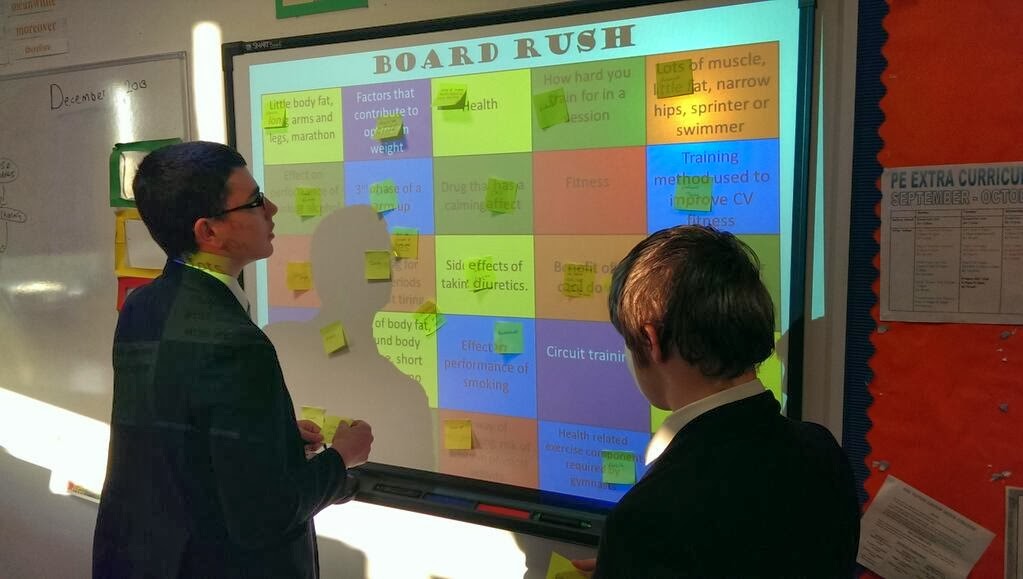 Board rush involves creating a grid on the board that includes a number of key words/terms and definitions that also include a number of post its. Pupils then have to come up to the board and move each post it to the correct box. Pupils can be timed to see which pair completes the board rush in the quickest possible time. You could also play fun music whilst pupils complete the task such as the benny hill theme or flight of the bumblebee.
Connect Four 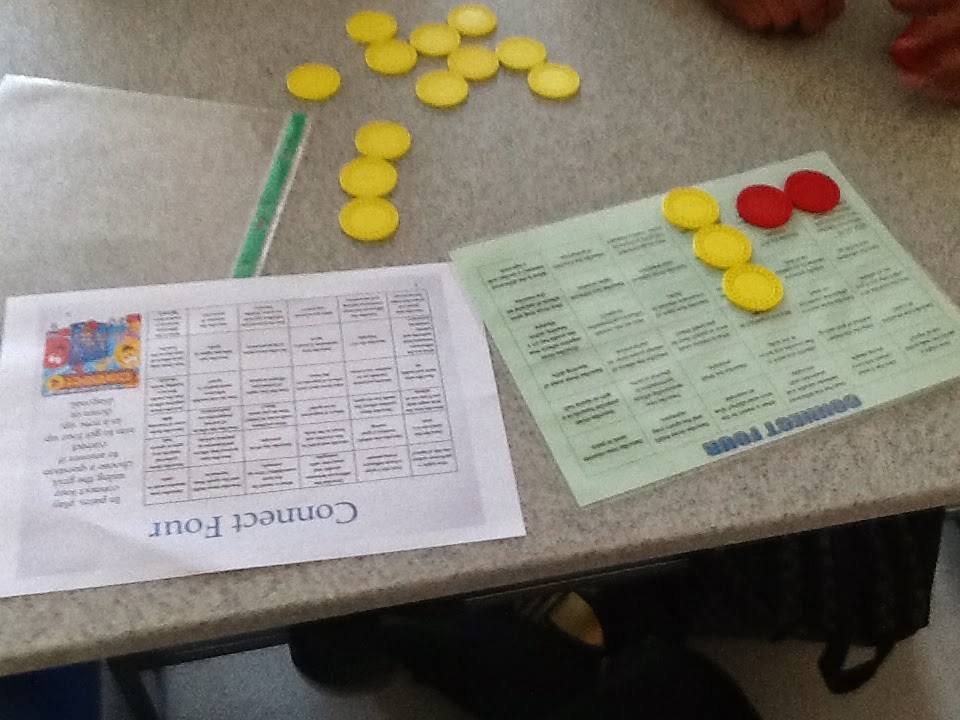 Create a connect our template and laminate it. In each box have a question, pupils then choose a box and answer, if they are correct and their partner accepts their answer, they put their specific coloured red or yellow counter on that question.  Winner is the first to have four in a row.
Table Writing 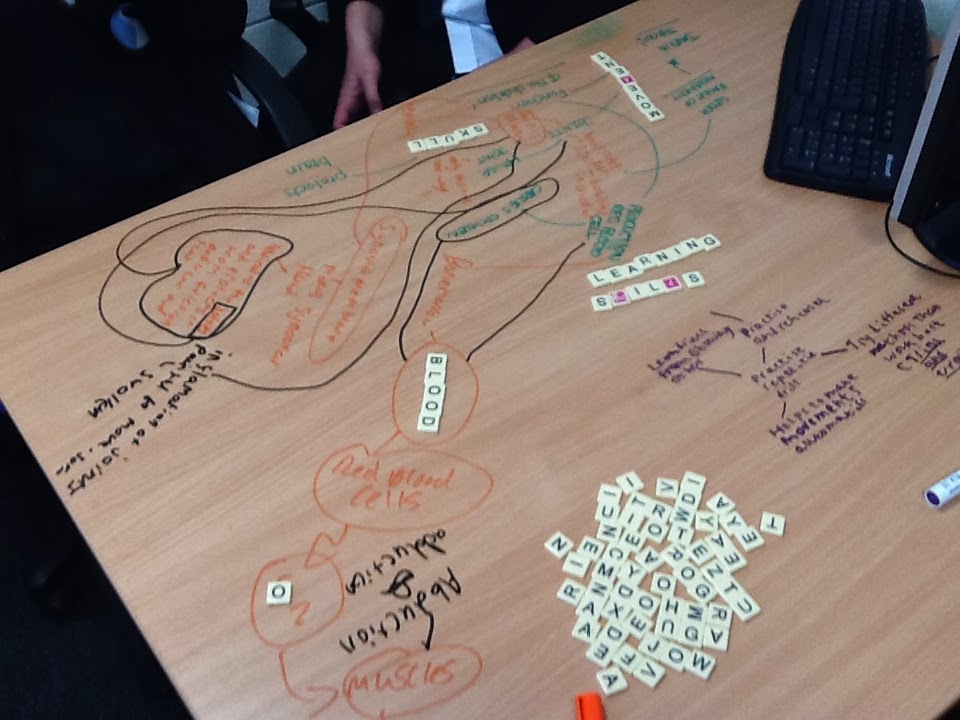 Give pupils some marker pens and get them to mind map key words and definitions from the specification. They an also link them together. As an alternative give them some scrabble tiles as well. Pupils could take a photo of their mind map and use this as a revision tool.
Roll a link 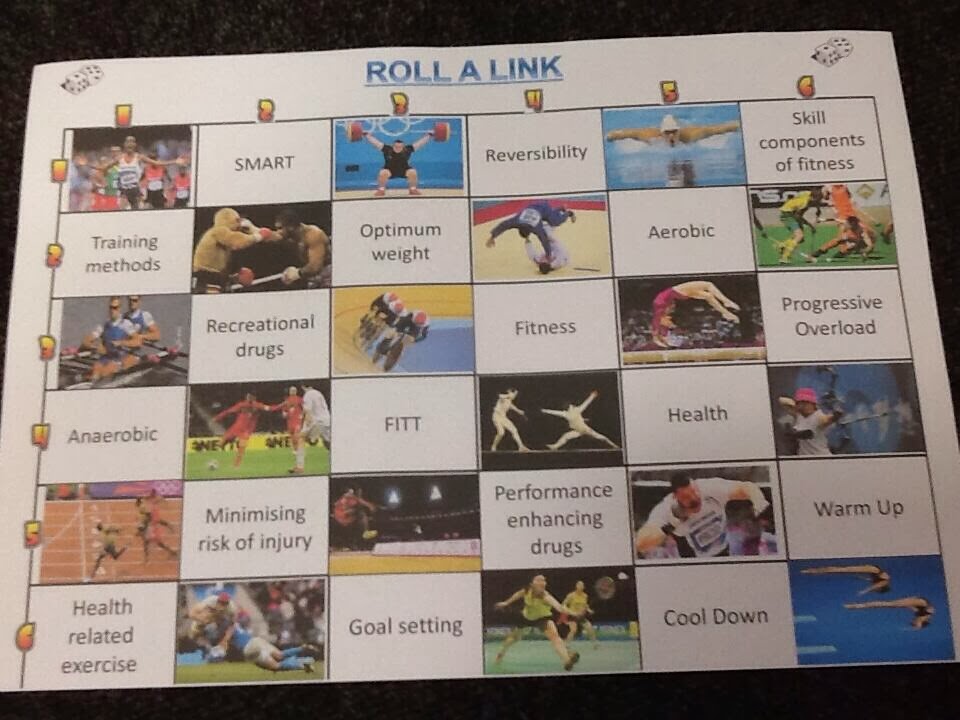 Roll a link involves pupils rolling a dice to generate two images or key words.  The first number relates to the row, the second number relates to the column. Once two images or key words have been generated, pupils have to describe a link between to the two boxes.
Some of these activities and others can be seen in this shadow puppet video clip Revision activities in GCSE P.E
Posted 26th January 2014 by Tom Brush
Tags: AQA, Edexcel, Exams, GCSE, revision, Theory
Share This Post